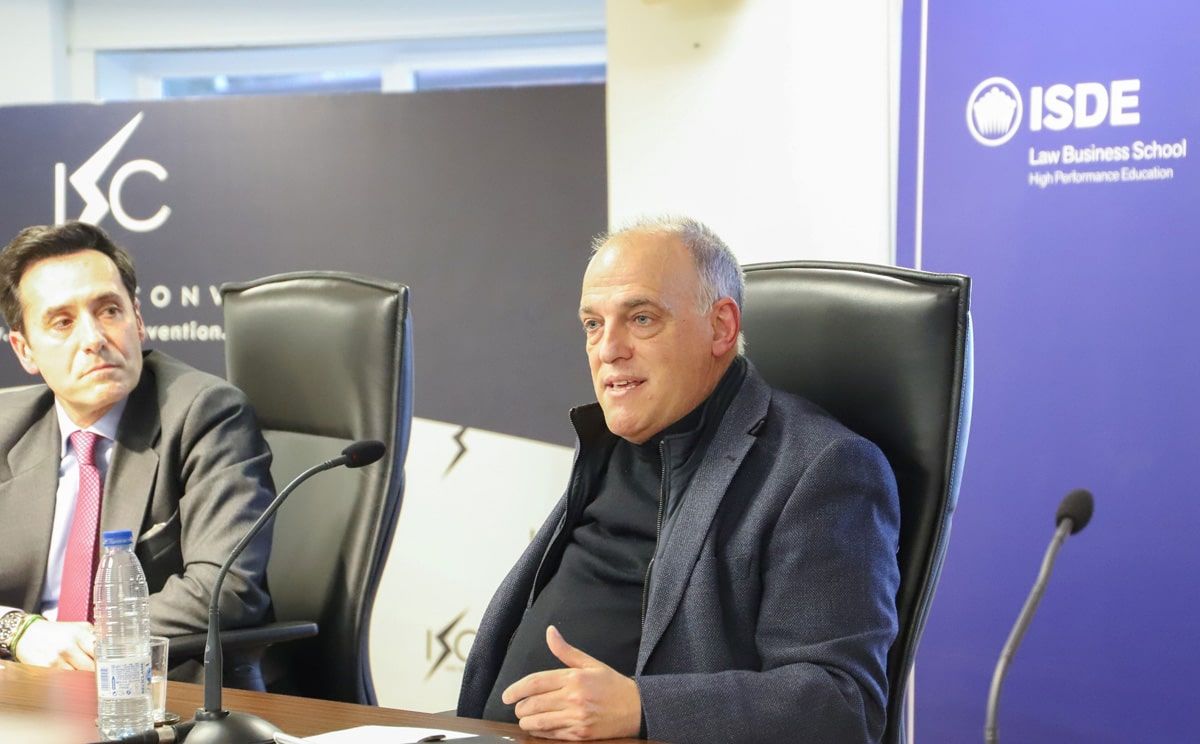 JAVIER TEBAS IN THE PRESENTATION OF THE ISDE SPORTS CONVENTION: “THE CVC PROJECT WAS NECESSARY TO UPDATE THE SPORTS INDUSTRY”

Written by isdesport on 25 February, 2022. Posted in Noticias.

The LaLiga president participated in the third edition of the ISDE Sports Convention, held in May in Madrid, world sport capital.

On 15th February, at ISDE Madrid, the presentation of the third ISDE Sports Convention took place in which Javier Tebas participated in the round table ‘Football: Current trends in law and sports management’ alongside the coordinator of the book of the same name, Felipe Toranzo, Managing Partner at FT Executive Search and Juan de Dios Crespo, CEO of RH&C Sports Lawyers, co-authors of the book. The roundtable was moderated by Gaspar Díez, editor-in-chief of Sports of Europa Press.

Javier Tebas warned that if the Spanish league wants to “compete”, it must grow internationally, an objective that La Liga Impulso will achieve with the creation of, among other measures, club academies around the world.

“This project makes it possible to bring forward by 15 or 20 years what the clubs would have done organically. Would Rayo build a new stadium if they didn’t have 35 million from the Impulse Plan? I think it would be difficult. This project was necessary for LaLiga to catch up in the sports industry and bring us closer to the Premier League. If we hadn’t done it, our industry would have declined. It is the most important project undertaken by the Spanish League,” he emphasised.

He described The European Super League initiative, promoted by the Real Madrid President, as the big club’s, who believe they should rule world football, “ideological weapon”. “The three castaways carry the flag to give the impression of a false unity. It’s false because that’s how Juventus is and how Barça is. Madrid are going to get Mbappé and Haaland and the others are half-broke. Mbappé coming is great news for LaLiga”.

The recent Spanish Super Cup in Saudi Arabia, organised by the Royal Spanish Football Federation (RFEF), “is indeed profitable” for the football industry, and he described the biannual World Cup that FIFA wants to launch as “very exciting”. “It’s going to bring in more money. Yes, but by paying the clubs for the players,” he said before pointing out that the Miami game “is not a dream” but will be a “reality at some point”.

SANCHEZ PUIG: “THE ISC IS THE LEADER IN LAW”

In his welcoming address, ISDE CEO Juan José Sánchez Puig described Javier Tebas’ management since he arrived at La Liga in 2013 as “masterful”.  “Javier has given us an example of what it means to speak digitally, to fight for equality between all clubs, and to know how to project an image of unity of Spanish football, without exclusions, at an international level,” he said.

Sánchez Puig highlighted LaLiga’s commitment to the ISC, which “is a reality and has become the benchmark event for sports law and management”, an event in which leading national and international experts will discuss the digital transition, sports betting legislation, the promotion of women’s sport and, among other topics, the organisation of major sporting events.

FT Executive Search partner Felipe Toranzo outlined the contents of the book he has coordinated: conversion of clubs into SADs and their valuation, buying and selling and investments in entities, talent management, COVID’s impact on footballers’ contracts and the integration of women’s rights in the new Sports Law (currently before Parliament).

“This book is a buyer’s guide to valuation processes, club management, and leadership models. It also highlights the important work carried out by LaLiga and the CSD in establishing economic control processes. I hope you find this book, as Del Bosque says in the foreword, timely and illustrative and that it becomes a reference for study,” Toranzo said.

CRESPO: “THE SUPERLEAGUE IS LEGAL”

For the CEO of RH&C Sports Lawyers, Juan de Dios Crespo, Superliga is “legal as long as you are ‘Super League”. “There has been a question that has not been asked: can I be in the league and the federation without fulfilling the objectives of both? Are you in or out? What you want is to have the best of each world without having the obligations of each world, and Super League is legal. Unfortunately it’s going to be a tough fight,” he predicted.

Crespo explained the differences between ‘transsexual’, somone who “changes sex” to normally obtain a benefit in sport, and ‘transgender’ as in the case of the South African athlete Caster Semenya. “Cut off the feet of Michael Phelps, who is 56, because he has a natural advantage. Caster is a woman. Don’t come and cut that testosterone without knowing if it’s good for your health,” she said.

This round table was held under the framework of the third edition of the ISDE Sports Convention (ISC), the first international sports congress organised by an academic institution, ISDE, in collaboration with LaLiga.

ISDE Sports Convention (ISC) is directed towards high-level company representatives of sports law, Marketing and Communication Directors, and, among others, students specialising in sports law. The 2022 ISC took place in a hybrid format, in-person and streaming, and will be the first major international sports law event in a year in which the Beijing Winter Olympics and the Qatar World Cup will be held, and in which Madrid will be the international epicentre of sport with the celebration of the World Capital of Sport.

This round table was held as part of the third edition of the ISDE Sports Convention (ISC), the first international sports congress organised by a university academic institution, ISDE, in collaboration with La Liga.

Among the sponsors are La Liga, the Spanish Chamber of Commerce, the Madrid Bar Association, PONS Business School, BROSETA, iusport and the CEOE.