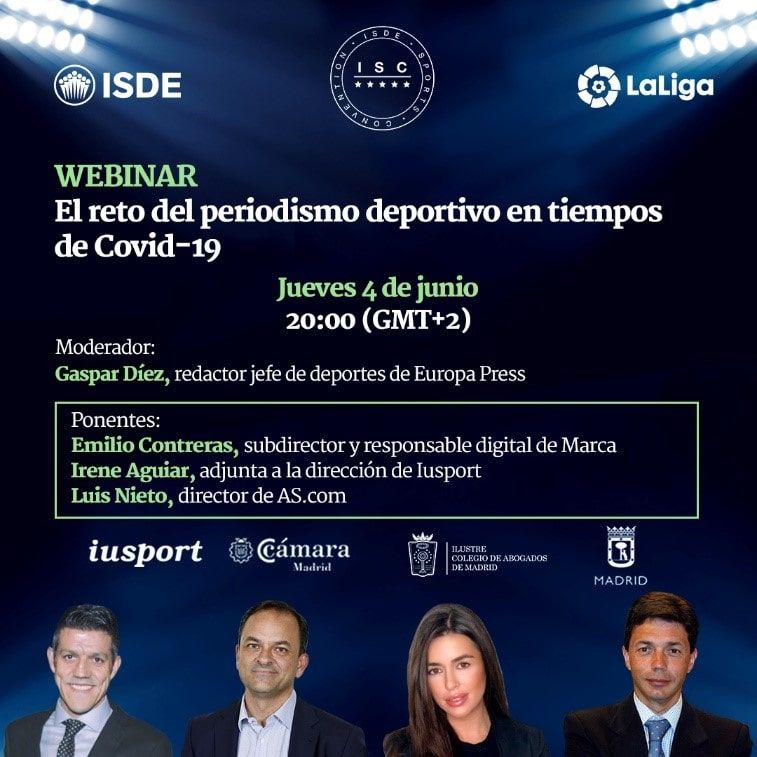 The Heads of As.com and Marca.com, Luis Nieto and Emilio Contreras, and the Assistant Director of the legal portal IUSPORT, Irene Aguiar, will analyse the challenges of sports journalism in the face of the COVID-19 pandemic, at the next ISDE Webinar, the online talk promoted by the Instituto Superior de Derecho y Economía (ISDE) which will be held this Thursday (20:00) as part of the ISDE Sports Convention (ISC).

Under the title ‘The challenge of sports journalism in times of COVID-19’, the three experts will present their personal view on the future of the media sector, which has had to accelerate teleworking and digitisation to adapt to the reality marked by the health and economic crisis of coronavirus.

Irene Aguiar is Deputy Director of IUSPORT, a portal specialising in sports law, of which she has been a member since 2010, and where she is also a columnist. A Legal Advisor specialising in sports law for sports clubs, athletes and federations, she holds a degree in Business Administration and Management and Law from the Universidad Rey Juan Carlos and a Master’s Degree in Sports Law and Management from ISDE.

She is also a member of the Electoral Board of the Royal Spanish Handball Federation and the Spanish Rugby Federation. In addition, she is a speaker at conferences and congresses on sports law, the author of  ‘The new sports law of the Canary Islands’’, an article published in the Revista Aranzadi of Sports and Entertainment Law.

With a degree in Information Sciences from the Complutense University of Madrid and a Master’s degree in the Higher Programme of Digital and Strategic Transformation (EOI), Luis Nieto made his debut in journalism in 1982 at the now defunct Diario Ya, where he worked until 1989. During that period, he also contributed to the magazines Época and Empresa XXI. He later worked in the editorial offices of El Independiente and Diario 16.

After the acquisition of the newspaper As by Grupo PRISA (1996), Nieto joined the editorial staff of the newspaper, where he has worked as Head of Football, Editor-in-Chief and Deputy Editor. In 2008 he was appointed Director of As.com and in 2017, Director of Information.

Emilio Contreras also holds a degree in Information Sciences from the Complutense University. He began his professional career in local media in Getafe in 1989 (local magazine, TeleGetafe, Radio Getafe, Onda Madrid and Radio Fuenlabrada) before joining Agencia EFE, where he worked from 1992 to 1996.

In March 1996 he joined the newspaper Marca as an Editor, which, after he had worked in the Second Division and Editions sections, appointed him Head of the Football Section in September 2001, and subsequently Head of the Real Madrid and Opinion sections. In March 2010 he joined Marca.com as Head of Content and, since October 2014, he has been the Digital Manager. In October 2016 he was appointed Deputy Director and has led the digitalisation process of the sports daily.

This is the fifth ISDE Webinar during the state of health emergency decreed by the COVID-19 pandemic, within the ISC, the congress on law and the sports industry organised by ISDE, in collaboration with LaLiga, the Madrid Chamber of Commerce and the Madrid Bar Association.

In the previous sessions various experts have appeared such as: the Brazilian lawyer Daniel Cravo, expert in sports law at ISDE and member of the Executive Committee of the International Association of Football Lawyers (AIAF); the Director of the Women’s Football Area of LaLiga, Pedro Malabia; and the Brazilian lawyer and ISDE professor Marcos Motta, who reflected on the challenges facing the transfer system and football agents in the face of the health and economic crisis caused by the coronavirus.

Also in previous sessions, the Heads of eSports at Movistar, Ander Pérez and Guillermo Mañas, spoke about a social phenomenon, eSports, which has an audience in the millions. The Directors of As.com and Marca.com, Luis Nieto and Emilio Contreras, and the Assistant Director of the legal portal Iusport, Irene Aguiar, addressed the challenges and the near future facing sports journalism in the post-coronavirus era, and the lawyer Juan de Dios Crespo spoke about sports arbitration in times of COVID-19 and the legal consequences caused by the postponement or cancellation of major sporting events.